Hey all! Sorry for taking so long between updates, we are pushing things along as usual and working on getting Issues #3 and 4 done as quickly as possible with our ridiculous schedules. More updates to come, but wanted to give you a peek at what we've been working so hard on!
We hope you are all having an awesome Christmas (and other holiday) season and that the new year brings great blessings your way.


Posted by Darkhan Studios, LLC at 6:45 PM No comments:

Moving along with Elders of the RuneStone Issues 3 and 4...and Salt Lake Comic Con 2013!

Just wanted to give a quick update. Things are still moving along with Issues 3 and 4, see a sample page (lettered pencils) below! Once all four issues are completed of the first miniseries, we will be talking to publishers again and working on getting the collected graphic novel out! Thanks for your patience! 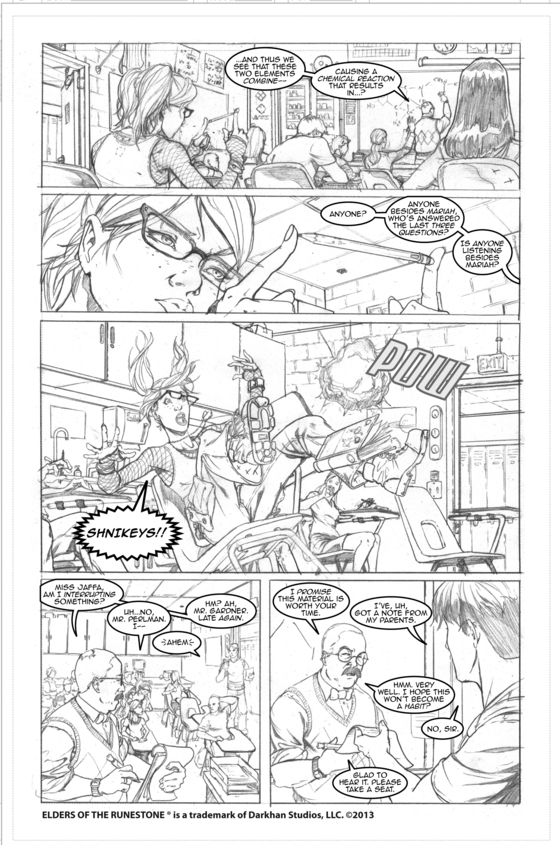 Jenny gets into trouble in Elders of the RuneStone Issue #3. Art by Dan Glasl.

On a side note, Salt Lake City, Utah just had its very first Comic Con last weekend, and Quinn and Troy were featured special guests and panelists on several different panels! The show was a ridiculous success, hosting something like 70-80,000 people on Saturday alone and filling the Salt Palace convention center to capacity, leaving hundreds and hundreds of costumed fanboys and fangirls waiting for hours to be let in (see photos below). It also featured such esteemed guests as William Shatner, Ray Park, Henry Winkler and the incomparable Stan Lee! They are planning to do it again next year and to devote the entire Salt Palace space. Lesson learned: Utah has a huge population of comics fans! 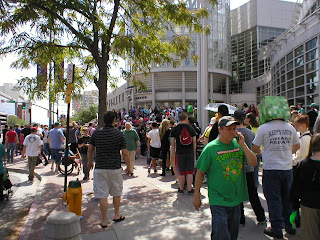 By Saturday afternoon, the building's floor capacity reached it maximum capacity, but that didn't deter hundreds more fans trying to get in to Salt Lake Comic Con 2013. The line went on and on... 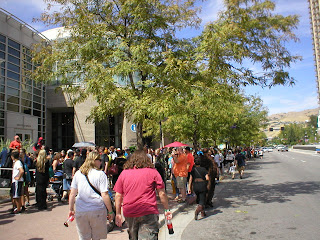 ...and on and on...
It actually wrapped around three sides of the Salt Palace convention center! 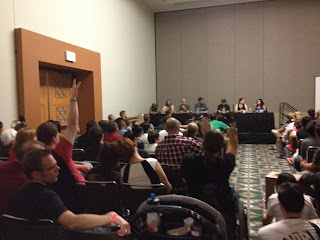 Quinn spoke on several panels, including Writing for Comics, Creating in Someone Else's Universe, and the one above, DC Movies Vs. Marvel Movies. On that last one, crazy fans were invited to the panelist table to throw in their two cents...okay, more like their $100. 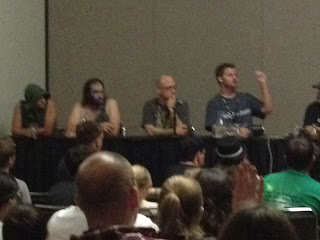 Quinn (center) contemplates his next comment on whether Marvel or DC is better...or maybe he's contemplating how to escape the panel before the torches are brought out! 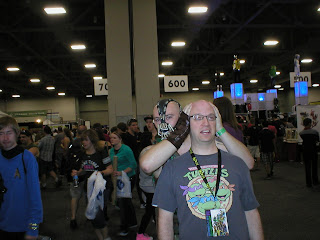 When Bane offers a hug, just say NO. 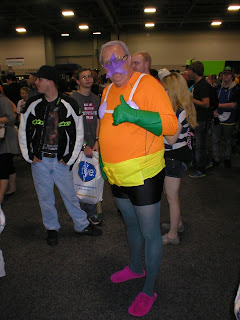 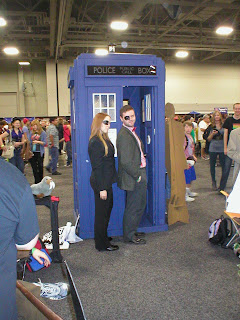 The 11th Doctor and Amy Pond made an appearance with the famous TARDIS! 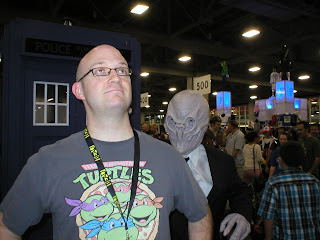 Those darn Silence. Their power to make you forget them as soon as you look away makes it harder to hang out later. 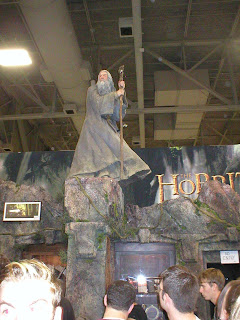 Weta of Lord of the Rings and The Hobbit fame showed off their amazing work. 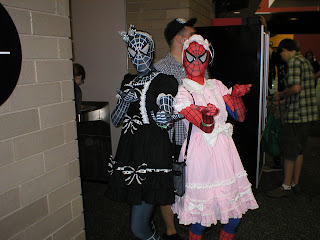 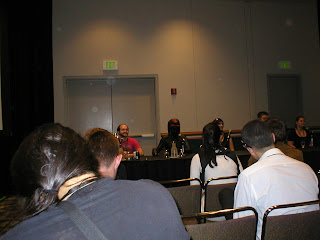 Troy (red shirt) spoke about working on the new Disney Infinity game at the Breaking into the Video Games Industry panel. 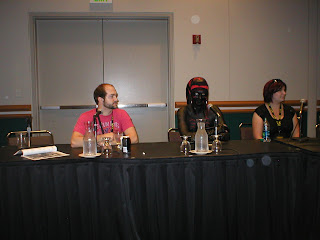 Never look a Sith Lord (Spyder O'Neil) straight in the eye. Even if he is on the panel.
Posted by Darkhan Studios, LLC at 11:31 AM No comments:

Hey all, just a quick update!

Crazy, crazy month for the creative team. As a result things are a bit behind schedule, but we are hard at work getting ready for C2E2 in Chicago next month where we'll do our big premiere of Elders of the RuneStone now that a good chunk is completed.

Just a heads up, I (Quinn) will be showing off the series at the SLC Nerd show on April 20th in SLC!

And check out the pencils for page 1 of Issue #3 below, starring Kickstarter backers Wilton Yeh (left) and Troy Johnson (right)!

In the meantime, you can download Issues #1 and Issue #2!
Posted by Darkhan Studios, LLC at 8:29 PM No comments:

Elders of the RuneStone #2 is now available to the public!

Hey all! Now that all of our amazing Kickstarter backers have their advance PDF copy, Issue #2 is now up for download for the rest of the world!

The link to download the issue is http://artistalleycomics.com/comics/titles/elders-runestone/24/ on http://ArtistAlleyComics.com. So if you liked it, please spread the word!

After being rescued from the psychotic Smiley by a mysterious black-masked vigilante, Scott Gardner again focuses on just surviving high school. There he befriends the fiery Jenny Jaffa, a fellow outcast who convinces him to go to the Homecoming Dance. A run-in with the bully Dain Mabius and his girlfriend Kat Ivery is only the beginning of an unforgettable night, as a second meteorite crash-lands and the four high school juniors find themselves manifesting insane new powers!

We're working hard on Issues #3 and #4 right now and getting ready to show them off at C2E2 in Chicago this April!

Quinn
Posted by Darkhan Studios, LLC at 10:37 PM No comments:

Hey all! Just a few more pages of colors and Issue #2 will be DONE! Take a gander at the inks for the cover!

Big announcement: Robert and Quinn are planning to be promoting the first story arc of Elders of the RuneStone (Issues 1-4) at the C2E2 Chicago comic con this April! We will have all 4 issues available for download at that time, and will be talking to publishers about partnering with us to do the first printed trade. If you're going to be at the show, drop us a line so we can keep an eye out! We'd love to meet you! 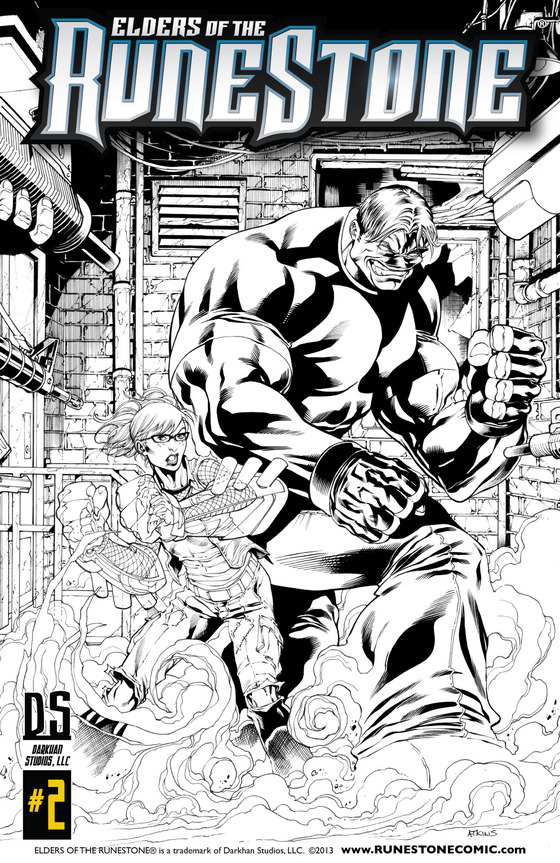 Posted by Darkhan Studios, LLC at 3:28 PM No comments: