Hey everyone, hope you've all had a great holiday season and that 2008 is an awesome era for you. If all goes according to plan it will certainly be so for us! As production continues, we appreciate everyone's ongoing support! We promise it will be well worth the wait as Elders of the RuneStone makes its first issue-length appearance!

Back before there was RuneStone, another character was formulated in my mind and took all my attention: a lizard-man named Slythe. He was significant in that I put a lot of effort into his story and that his arch-nemesis eventually became Monolith, the enemy of the heroes in RuneStone. So here's a little bit of fun info on him! 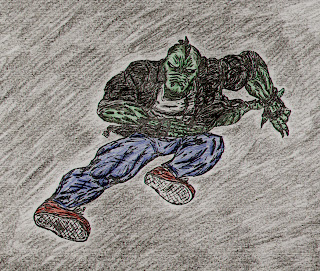 Slythe, Reptillian Master of the Martial Arts
The basis of Slythe was that in the near future (September, 1995; I worked on the character through sixth grade and junior high, circa. 1991-1994) an alien race known as the Reptillians (notice the extra "L", so it's not the same as our HUMAN spelling) came to Earth after their own planet was destroyed by cosmic rays. It was pretty much a rip-off of the Alien Nation concept, but hey, I was like 12 at the time. These aliens were gradually accepted into Earth culture and treated like normal citizens of the planet. As time went on, a married Reptillian couple had a child named Slythe, who as a child met a martial arts master (at the time, master of Karate and Kickboxing!) named Wu Shu. (I found out later that Wu Shu is the name of an actual martial arts style. Weird.) When Slythe's parents are killed by an evil cult, he vows vengeance and uses his martial arts expertise to become a vigilante.

Several fights later, Slythe would come up against the leader of the cult, who is kidnapping children for some sort of sacrificial ritual. The leader is a mysterious cloaked fiend known as the Reaper. Then the Dark Hood. Then the Dark Specter. The point of the matter was, he was really evil. Slythe was forced to use his karate and kickboxing prowess against a villain who had magical power-blasting abilities. After tearing the cloak from the fiend, it was revealed that the Reaper was an inhuman creature from some foul realm. Eventually Slythe was the victor, and the Reaper was knocked into a vat of toxic chemicals. Was he dead? The iconic hand rising from the depths was clearly not of that opinion! And so future battles would reveal the Reaper had been mutated by the chemicals into a massive hulking creature with super-strength. (Don't you hate that?)

So that was the basis for the character. In hindsight, the storyline borrowed liberally from many other comic books, but to me it was "totally rad." The story evolved over time (I never got very far at actually drawing the story); eventually Slythe obtained sophisticated gadgets and a sweet super-car (a la "Batman"), a back-up team of operatives, and mystical abilities granted him by the spirit of his deceased master Wu Shu. And why all the alien backstory for a hero who is essentially just a good martial artist? Simply because lizard-men are cool. So without further ado, for your viewing pleasure, check out the various images below that went into this ultimately discontinued but still fun and exciting creation from my younger years. Note that the art is all from my younger days, so please, no mockery of the terrible disregard for realistic anatomy or man-faced females.

Covers for my first attempt at the Slythe comic. Notice the Van Damme outfit. And it's the "first in an unlimited 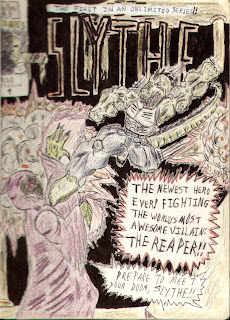 series"! (Still not sure what that means.) 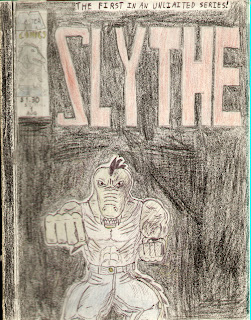 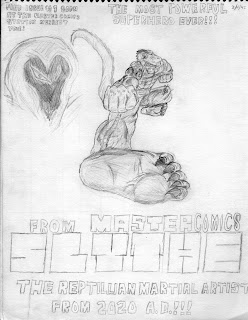 Here is some super-foreshortening. Foot in your FACE!
Notice that this comic will be at a comics station near you! 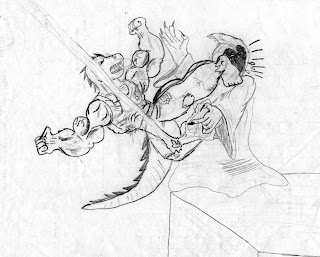 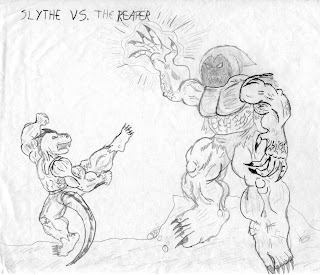 
And the "big reveal" with the unmasked Reaper. This was in the days before I started editing the comic for language. 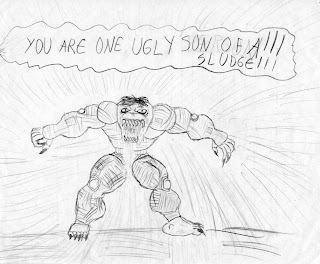 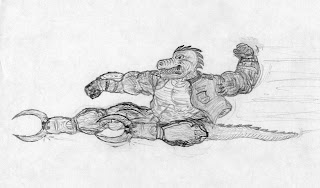 And one more. This was after Slythe had a wardrobe change with a leather jacket and gloves. I drew him here with cool shoes that had blades that flipped out.

So there you have it. Next time I'll reveal more pics of Slythe as he evolved...and you'll see more of the influence that found its way into RuneStone. Ciao!