Hey all! And welcome back to another exciting edition of the Elders of the RuneStone blog.

Two new bits of news this week. First off, RuneStone artist Robert Atkins’ latest work for the Heroes TV series can be seen at the link below. It is part two of last week’s cliffhanger Trust Issues.


Also RuneStone writer Quinn Johnson’s work can be seen in the upcoming comics anthology Scrapyard Detectives: Secret Case Files. Get ready for some spooky and weird adventures as the kid investigators take on the mysteries of the supernatural! More news to come. Until then, check out the cover below! 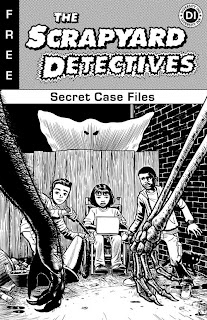 Hey all! Quinn here. Thanks to those who made it out to Free Comic Day. It was fun to visit with you and talk about RuneStone. Hope to see you again next year! As an added bonus, Utah news station KUTV interviewed me and posted the whole thing at the following link:

In other news, series artist Robert Atkins has completed his third story for the Heroes TV series web-comic—Chapter 84, Trust Issues! You can see it at the following link:

And in another bit of news, we have a winner for last week’s Elders of the RuneStone trivia contest! Matt Madsen answered all 20 questions correctly and won an original sketch by Robert of Adder. Nice choice! The original questions and their answers are below:

1. Q. At what city’s comic convention did Elders of the RuneStone first get unveiled to the public?
A. Chicago.
2. Q. Which character’s sketch first got posted on the blog?
A. Smiley.
3. Q. In the blog post The Human Element in Comics, what is the name of the author who wrote Creature Tech?
A. Doug TenNapel.
4. Q. What is emeritus RuneStone inker Rick Ketcham’s wrestling name?
A. THE RICK.
5. Q. What grade was RuneStone writer Quinn Johnson in when he got the first idea for the series?
A. 9th.
6. Q. What was the character Dain Mabius (Gremlin)’s original name when he was first created?
A. Spencer Mabius.
7. Q. What was the character Kat Ivery’s original hero name before it was changed to Catalyst?
A. Fireworks.
8. Q. What is the name of Scott’s little sister who is kidnapped, leading to a big fight scene? (Hint: the writing will be very small)
A. Emily.
9. Q. What number should you call for Gar’s Free Towing Service?
A. 1-800-Butt-Kicker.
10. Q. What is the name of Adder’s fighting style?
A. Nakashi Do.
11. Q. Before the Monolith became the villain of Elders of the RuneStone, what unrelated character was his arch-nemesis?
A. Slythe.
12. Q. What comic company is mentioned in the blog that the RuneStone idea was submitted to but rejected by (several years ago)?
A. Top Shelf.
13. Q. To avoid smearing as he draws, what art material does series artist Robert Atkins place under his hand to cover portions of the underdrawing while working on it?
A. Typing paper.
14. Q. On the unofficial soundtrack for the second RuneStone movie, what three songs are by Juno Reactor?
A. High Energy Protons, War Dogs, Insects.
15. Q. What popular video game has featured unofficial cameos by the heroes of Elders of the RuneStone?
A. RockBand.
16. Q. While looking for love with his Ninja Turtles T-shirt on, what room number is Scott seeking?
A. 202.
17. Q. What project was series colorist Bob Pedroza’s trial by fire to determine if he’d get the job?
A. The cover of Issue 1.
18. Q. Who is the director of the (April Fool’s) off-Broadway musical of Elders of the RuneStone?
A. Ivo Van Hove.
19. Q. What will Adder give you free lessons in?
A. Kung Fu Justice.
20. Q. How many fingers does Jenny’s energy armor have on each hand (not including the thumb)?
A. Three.


And finally…take a gander at the flyer I handed out at Free Comic Day! Awesome colors by Bob Pedroza! (Click on the image for a larger view) 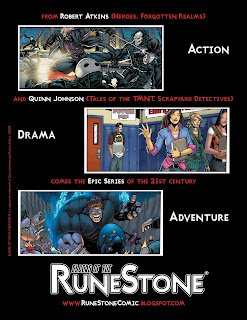