Welp, here it is! Our very first contest based on the Elders of the RuneStone comic series. What follows is a series of trivia questions about various aspects of the series, its characters, its history, and random miscellanea. All answers can be found by searching the blogs on this site from the first one last summer up to now, as well as searching the art found in the Photos section of the Elders of the RuneStone group page on Facebook.com. The first person to email ALL the correct answers to runestonecomic@gmail.com (this may change if our questions turn out to stump you all!) will receive an original sketch of the RuneStone character of their choice by series artist Robert Atkins! Here goes!

1. At what city’s comic convention did Elders of the RuneStone first get unveiled to the public?

2. Which character’s sketch first got posted on the blog?

3. In the blog post The Human Element in Comics, what is the name of the author who wrote Creature Tech?

5. What grade was RuneStone writer Quinn Johnson in when he got the first idea for the series?

6. What was the character Dain Mabius (Gremlin)’s original name when he was first created?

7. What was the character Kat Ivery’s original hero name before it was changed to Catalyst?

8. What is the name of Scott’s little sister who is kidnapped, leading to a big fight scene? (Hint: the writing will be very small)

9. What number should you call for Gar’s Free Towing Service?

10. What is the name of Adder’s fighting style?

11. Before the Monolith became the villain of Elders of the RuneStone, what unrelated character was his arch-nemesis?

12. What comic company is mentioned in the blog that the RuneStone idea was submitted to but rejected by (several years ago)?

13. To avoid smearing as he draws, what art material does series artist Robert Atkins place under his hand to cover portions of the underdrawing while working on it?

14. On the unofficial soundtrack for the second RuneStone movie, what three songs are by Juno Reactor?

15. What popular video game has featured unofficial cameos by the heroes of Elders of the RuneStone?

16. While looking for love with his Ninja Turtles T-shirt on, what room number is Scott seeking?

17. What project was series colorist Bob Pedroza’s trial by fire to determine if he’d get the job?

18. Who is the director of the (April Fool’s) off-Broadway musical of Elders of the RuneStone?

19. What will Adder give you free lessons in?

20. How many fingers does Jenny’s energy armor have on each hand (not including the thumb)?
Posted by Darkhan Studios, LLC at 6:00 PM 1 comment:

Yes, you read right! Next week we will hold our first ever Elders of the RuneStone contest, right here on this blog! There will be series of trivia questions about the series; all answers will be pulled from information in this blog (www.runestonecomic.blogspot.com) from the first post in August 2007 and on, and since our regular website is under construction, also from material posted on the Elders of the RuneStone group on Facebook. The first person to email ALL the correct answers to runestonecomic@gmail.com will win an original sketch of the RuneStone character of their choice by series artist Robert Atkins! More details to follow!

Another announcement of note is that series writer Quinn Johnson will be a guest at Free Comic Day, Saturday, May 3rd at Night Flight Comics in Salt Lake City! Official information on the event below:

There will be a selection of free comic books appropriate for all ages available as well as big coloring pages. (Limit one comic book per person so we can have supplies last all day long.)

We will also have four local professional comic book artists in house at our 6222 So. State Street location from 3:00 p.m. to 6:30 p.m. autographing comics and free sketches for kids. They are as follows:

QUINN JOHNSON - Elders of the RuneStone, Tales of the TMNT

TREVOR NIELSON - The Lily Maid (The Joan of Arc Story)

You an also find this information on the web site here: http://www.night-flight.com/events.htm
Posted by Darkhan Studios, LLC at 8:19 PM 1 comment:

Hey all! There have been some changes in our line-up as of late. While superstar Rick Ketcham has had to bow out of regular inking duties due to an especially hectic schedule, he will still be doing an occassional special project with us from time to time. And thus we're proud to introduce the amazing Joey Stone as our new regular inker on Elders of the RuneStone!

Joey has quite an impressive background in the art world, though in joining our team he can finally pursue his real dream: comics! We are very excited to have him aboard and he is already doing a stellar job in turning out page after page of Issue #1! So expect to see the story pick up again very soon, with pages posted right here.

Check out Joey's work with the following links:

Here's a little teaser of what's to come. (Click on the image for a larger view) Until next time! 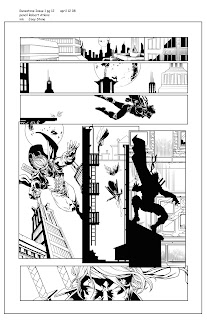 On the plus side production is again moving into high gear on Issue 1 and we are excited to have more material to show off soon! We'll keep you posted!

The regular www.runestonecomic.com site is under construction and will be for the next couple months in preparation for the Wizard World Chicago convention, so until then keep your eyes on this blog (http://runestonecomic.blogspot.com/ ) for regular updates as usual! Also if you are on Facebook look up the Elders of the RuneStone group and join up! We have been gaining members at a rapid pace.

In other news, RuneStone artist Robert Atkins has been interviewed by the Heroes Wiki for his work on the Heroes TV series web-comic on NBC.com. Check it out here: http://heroeswiki.com/Interview:Robert_Atkins.

And finally, enjoy this sweet concept art from the Elders of the RuneStone movie pitch:

Elders of the RuneStone to be Off-Broadway Musical!

Below is the official press release for this groundbreaking development. Please pass it on!

Salt Lake City, UT—Utah-based company Mr. Wonderful Productions announced Friday, March 28, that its creative property Elders of the RuneStone has been optioned as an off-Broadway musical. The story of teenagers obtaining superhuman powers will be helmed by famed director Ivo Van Hove (The Misanthrope), with music and lyrics by ex-*NSYNC front-man Justin Timberlake. “I stumbled upon the website for the comic and was overwhelmed by the dramatic potential,” Van Hove said. Timberlake added, “After my acting career started to take off, I thought it would be great to be behind a production like this. The riffs I’ve created for this musical will really appeal to the young, hip generation. It will be totally phat.”

Elders of the RuneStone creator Quinn Johnson admitted he was “very surprised by the call.” “I guess I always pictured [Elders of the] RuneStone taking off as a comic and maybe a movie first. To be a musical…well, let’s just say it’s not what I expected.”

Co-creator Robert Atkins shared his own thoughts on the development. “I honestly think it’s a really terrible idea, and could ruin any chances of the story being taken seriously. But Quinn’s all for it, so I guess I’ll support him.”

The production will include performances by such renowned musical acts as U2, The Crystal Method, and Celine Dion. Timberlake has revealed titles such as “Never Thought I’d Be A Hero” and “Even Vigilantes Cry” as part of the song list. Elders of the RuneStone is slated for a December 18, 2008 premier at the New York Theatre Workshop, where famed musical Rent began its 12-year run.