Check out this awesome Elders of the RuneStone fan art by Tom Ryan (as mentioned in Episode #15 of The Darkhan City Times Awesome Things Podcast)! 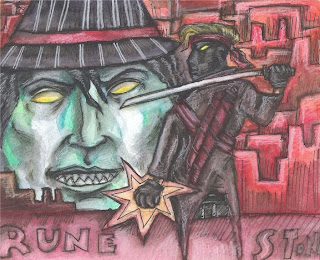 And yesiree, we've got the next startling installment of our world-famous podcast up and running!
(Click on the link to the right to listen)
Episode #15 description is as follows:

After a run-in with PETA, the Pantyhose Ninjas managed to escape just long enough to bring you Episode #15 of the DCTATP. Swing into our review of the new-gen "Bionic Commando," hire an assassin, and find out about some great all-ages comics to share with the little ones in your life. By the way, what is the appropriate gratuity for a trained killer these days?

And if that wasn't enough, check out this panel from Usagi Yojimbo Volume #17. Great minds think alike! (See "Quote of the Week" from Podcast #5 and you'll know what we're talking about.)

Podcast episode #14.5--Finally! A creators’ tell-all on “Elders of the RuneStone”!

It's finally here! For all of you who have been scratching your heads and wondering what's the latest on our creator-owned comic book series Elders of the RuneStone, this episode is for you!
(Click on the link to the right to listen)

Episode #14.5 description is as follows:

If you don't like this episode, blame Quinn and Robert because Troy (and thus his hilarious wit) is conspicuously absent this time around! Still, though, you'll learn all about "Elders of the RuneStone" in this episode, as the creators finally go in-depth on their original property. Plus, you'll hear some of the Governator's most famous movie lines. Who can resist that?

And as mentioned previously, you can click on the following link to check out Elders of the RuneStone writer Quinn Johnson’s interview with Dragon’s Keep! Insights into the world of comic book merrymaking abound…
Dragon's Keep Interview
Posted by Darkhan Studios, LLC at 7:33 PM 1 comment:

Click on the following link to check out “Elders of the RuneStone” writer Quinn Johnson’s interview with Dragon’s Keep! Insights into the world of comic book merrymaking abound…

Podcast #14—"Terminator Salvation" review and punching your loved ones 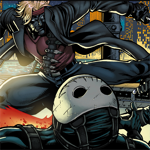 Check out Episode #14 of The Darkhan City Times Awesome Things Podcast by clicking on the link to the right. A mind-opening experience, as always! Episode description below:

Ever wonder what Robert would look like as a lumberjack? Well, wonder no more! Check out some great online entertainment hubs, find "Salvation" (pun!) in our review of the latest "Terminator," and learn the best tricks for punching both friends and family--right in the face. Wait... what? Lights out!
Posted by Darkhan Studios, LLC at 8:14 PM 1 comment:

Hey podcast fans, it's official! We're having a little contest for the best colored version of the "Pantyhose Ninja Drop-kicking the Puppy of Despair" as mentioned on Episode #12 of The Darkhan City Times Awesome Things Podcast (click on the link to the right to listen). You can find and copy the original black and white art from our May 29th, 2009 blog. Fan Keith Jackson already has a leg up on the competition as you will see below. No contest deadline yet.

The winner will receive some original art from Elders of the RuneStone artist and podcast co-host Robert Atkins!

Email your masterpiece to us at darkhancitytimes@gmail.com! 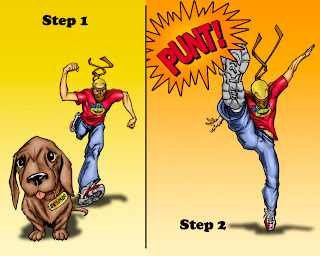 Keith Jackson's awesome rendition!
(Click on image for a larger view)
And check out this fantastic art by fan Brandon Earnhart, illustrating the most recent "Quote of the Week" from Episode #13! ("Do I look like I'm kidding? If I was kidding I'd be wearing a fez and no pants.") 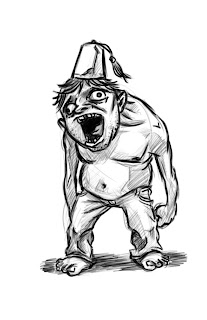 (Click on image for a larger view)
Posted by Darkhan Studios, LLC at 6:30 PM No comments: 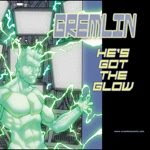 It's true! Click on the link on the right to listen to Episode #13 of The Darkhan City Times Awesome Things Podcast. Episode description is as follows:

"You're the best...around! Nothin's ever gonna get you down!" Trust us, those lyrics are more appropriate when describing "Punch-Out!!" for Wii than they are for the movie "Batman and Robin." Besides those choice reviews, you'll also learn why you should wear pants and how to successfully network among artistic professionals. Whom should we throat-punch next time?

And as always, you can read the first published Elders of the RuneStone story free online! Go to www.ApeCMX.com and click on the link to the Free Comic Book Day "Cartoona Palooza" book. Our story is the book's last five pages. Enjoy!
Posted by Darkhan Studios, LLC at 5:26 PM 1 comment:

Storytelling breakdown with the Tortoise and the Hare!

Hey all, Quinn here!
Clear back in Episode #7 of The Darkhan City Times Awesome Things Podcast we had a discussion on effective comic book storytelling. (click on the link to the right to give a listen) As an example, we discussed how at SCAD we had the assignment to draw and write the classic "Tortoise and the Hare" story...but without any dialogue whatsoever. It was a great exercise in the importance of clear and effective storytelling even when you can't rely on dialogue to explain what's going on. So below you'll find my version of the assignment with my comments on what I think works well storytelling-wise, and what doesn't. (I've hopefully come a long way since then!) 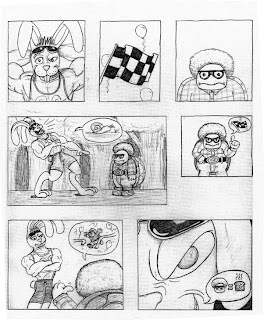 Page 1
Good points:
-What I think works here is that the character designs are very distinctive. The characters are obviously very different in both the way they dress, their body type, their posturing, and their personalities. It's pretty easy to see that the hare is the buff, athletic type and a real arrogant show-off, whereas the tortoise is just the opposite. You'll notice that while I couldn't use dialogue, I kind of "beat the system" with my "word balloons." Really look and see if you'd be able to get what's going on in the story as if you'd never heard this familiar story before.
-I like how at the beginning of the story, right before the actual "story" starts, we get a look at the two characters and their attitudes. Here's the cocky hare: BOOM. Here's the humble tortoise: BOOM. And between them is the checkered racing flag. Immediately we know that the story is about a race, as the checkered flag is universally associated with racing. And its positioning between the two characters also symbolically suggests that this race is the conflict "between" them, what divides them.
Bad points:
-Starting on this page and throughout the whole story, the backgrounds are pretty sparse and weak. It makes it harder to really be drawn into and to believe in the story. 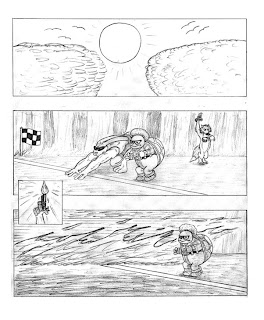 Page 2
Good points:
-The relative speed of the two characters is really shown, as well as the way they approach their racing. Totally intense / slow and steady.
Bad points:
-Those big puffy things in panel one are my "lazy trees." My professor thought they were clouds. In that case they would have been "lazy clouds." Hard to recognize. This panel doesn't do much to really give us an idea of where this scene is taking place, but it DOES hint that it's a new day (rising sun) and thus time for the race.
-The racing and the way the characters are facing (as well as the panel with the gun going off) is right to left. This is counter-intuitive to the Western culture, which reads books left to right, so it can subconsciously slow down (not good in a "racing" story) or just plain muck-up the story flow for the reader. In Eastern culture, this would be the opposite, as they do read right to left. 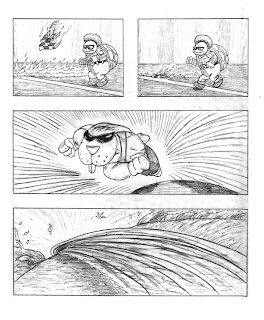 Page 3
Good points:
-I like the humorous "beat" between panels 1 and 2. That awkward pause as the burning flag slowly floats down, and THEN the slow tortoise gets going.
-I also like the action shot of the hare in panel 3. The foreshortening as he flies toward us, plus the speedlines, really give us a sense of ridiculous speed.
Bad points:
-Again, the action is going right to left instead of left to right.
-The last panel where we see the hare's trail of speed as he tears through the countryside could have been more effective if, in addition to the leaves being blown around in the distance, one or two leaves were between his speed trail and the "camera" of our eye, as if they were floating close to us. It would have added an extra sense of depth and thus realism and involvement to the scene, drawing us in as if we're really there. It would make it really seem as if the hare had gone from being close to us to far away as he races by. 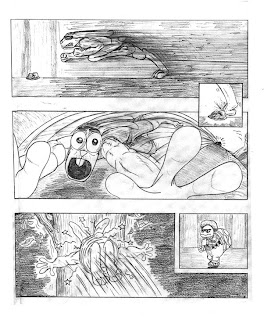 Page 4
Good points:
-The zoom in on the rock on the ground, which we may have missed in the first panel, emphasizes its existence and its importance to the action.
-I really like the action and funny expressions of the hare after he trips. Again it brings humor to the story and emphasizes his speed.
Bad points:
-Again, the direction the action flows should be from left to right, not right to left.
-I could have emphasized the "close-up of the rock" panel even more to make it even more visible to the reader.
-It would also be a good idea to bring the last panel with the tortoise down to the bottom of the page instead of having it touching the top of the last hare panel. There's a slight risk that the reader's eye will flow to the tortoise panel before the hare's last panel, and that interrupts the flow of the story. 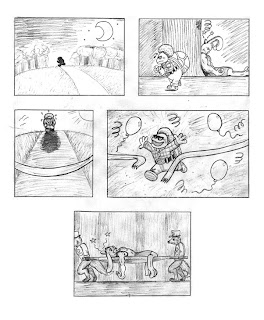 Page 5
Good points:
-Showing the tortoise as a silhouette and pulling back the "camera" of our eye in panel 1 breaks up the monotony of just seeing him running panel after panel. Look for ways to keep the action interesting, even if virtually the same thing is happening several panels in a row. (this is very important for scenes where characters are just having a conversation)
-I also like how the passage of time is shown with the moon and the sun in various panels. It emphasizes that this is one slow dude. It's also more funny.
-Panel 2 shows where the two characters are relative to each other. Now we know for certain that they have been traveling the same course the entire time, and haven't just been on different roads somewhere. (which could have been the case if we never showed them together at all once the race started)
-I like how the tortoise bursting through the tape to much fanfare is almost an exact duplicate of the scene his word ballon describes on page 1. It gives the sense the story has come full circle.
-Also the last panel of the hare being carried away on a stretcher brings HIS story full circle. We're not left wondering whatever became of him after he hit that tree.
Bad points:
-Again, the action should be going left to right instead of right to left.

So I hope this has helped! We'd be happy to hear your thoughts and comments. Happy storytelling!
Posted by Darkhan Studios, LLC at 5:49 PM 1 comment: