That's right, Episode #8 of The Darkhan City Times Awesome Things Podcast is up and running! (Click LINK on the right of the page)

With an adorable intro from Robert's baby son Connor, Episode #8's description is as follows:

Do you have an awesome nickname for your haircut? Well, you're not the only one anymore! Whip it good with "Castlevania: The Dracula X Chronicles," Robert's art experience with various writers' scripting styles, and more nudist horseback riding than you can possibly stomach. Luckily, Robert's adorable son Connor was there to rein the Pantyhose Ninjas back in.

And here's a link to the meaning of the word "Manitou" as discussed in our Sockbaby review in Episode #7, provided by Sockbaby creator Doug TenNapel himself!
http://www.youtube.com/watch?v=yIKU9hzRq6k

See you all at Free Comic Day this Saturday, May 2nd, where our first-ever Elders of the RuneStone published story will debut in Ape Entertainment's Cartoona Palooza #2!! 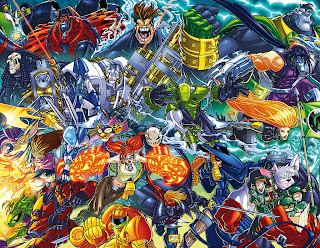 Check out Episode #7 of The Darkhan City Times Awesome Things Podcast (click on the link to the right)!

Pencilers, inkers, and colorists--oh my! Get hip-hoppin' with the internet short film sensation "Sockbaby," hook up with Robert's cousin this Christmas, and learn some professional tips on how to tell stories artfully and effectively. Warwick Davis would be proud.

Also be sure to check out Robert and Quinn as we make special guest appearances on May 2nd, FREE COMIC BOOK DAY! (Check the podcast for times and locations.) We'll be on hand to talk to fans and to sign copies of our first Elders of the RuneStone story ever published nationwide, in the Ape Entertainment Free Comic Book Day Anthology! 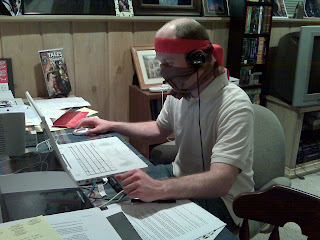 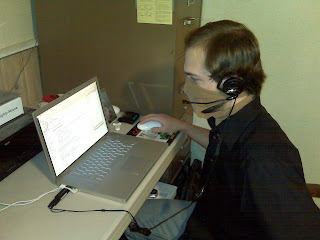 EDWARD CULLEN!...is mentioned in our podcast.

It's true! Our favorite sensitive vampire is mentioned in Episode #6 of The Darkhan City Times Awesome Things Podcast, now up for listening. Click on the link to the right to hear the glory!

**VERY IMPORTANT NOTICE FOR ALL PODCAST SUBSCRIBERS**
The subscription feed for the podcast is changing hosts! All you have to do is go to www.RuneStoneComic.com/podcast and hit "SUBSCRIBE." This will ensure that you will continue to receive episodes! It's THAT easy!

Prepare yourself for a bit of Troy's tender sensitivity, another trip into Ye Olde Mail Bag, Robert's verily unyielding review of "Thor," and a discussion on why HomestarRunner.com is the greatest thing to hit the interweb tubes. The Pantyhose Ninjas' "fetussity" is unbounded!

And enjoy this rare photo of one of your favorite Pantyhose Ninjas hard at work on a new episode! 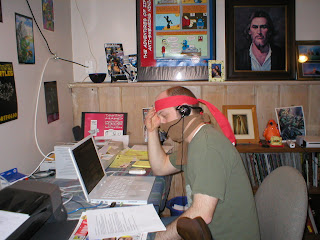 Podcast #5 is up! A discussion of SCAD...and two quick reviews

Hey all! Episode #5 of the Darkhan City Times Awesome Things Podcast is up! You can go straight there by clicking on the podcast link at the right of this page, or look us up in iTunes!
Episode description is as follows:

And two very brief movie reviews for your reading (and viewing) pleasure:

The Chronicles of Narnia: Prince Caspian (2008)
A follow-up to The Lion, the Witch, and the Wardrobe, this movie is absolutely awesome, as we follow the four Pevensie children for another adventure in Narnia. The heroes are summoned back to the fantasy world, only to discover hundreds of years have passed since their last visit and the land has fallen into the hands of a foreign enemy. Luckily the children are aided by new hero Prince Caspian, the rightful heir to their enemies' throne and the unlikely leader of Narnia's rebellion against her oppressors. But without Aslan visibly leading the way, can they succeed?

I enjoyed the first Narnia film, but in all honestly it seemed a bit like "Lord of the Rings Light." Not so with the sequel, where the four child actors have grown up a bit and their acting skills have become solid and convincing. The special effects are amazing, the direction epic, and the story is deep and intriguing with genuine thrills, humor, and intensity that will keep you riveted all the way through the final epic battle. And Prince Caspian is one cool dude.

The story is also noticably darker in tone than the first film, with some pretty intense violence (none of it graphic) and scary moments, especially when those who have lost hope seek for a force whose power (they think) can equal Aslan's. Being a huge fan of the books, the film is very faithful to the source material, but there are several significant changes and additions from the novel, all of them for the better, making it a much stronger movie with powerful character interactions and situations that really nail the intense struggle the heroes face as they start to lose faith in Aslan and have to really search within for their faith.

Highlights: Oldest brother and High King Peter, whose own struggles with faith (notice how many times he denies Aslan--correlation, anyone?) and misled arrogance threaten to lead Narnia into destruction; Edmund, the younger brother, who has changed from the traitorous punk he was in the first film to a solid and dedicated servant of Aslan and a butt-kicking fighter to boot; and Reepicheep the warrior mouse, who despite his small size has a fast tongue and an even faster sword that takes down his enemies by the score.

The Rookie (2002)
A lost gem of a film, based on the true story of a past-his-prime (or so everyone thinks, including himself) baseball player (played amazingly by Dennis Quaid) who decides to give his lifelong dream of playing in the Major Leagues one last try. And with a 98 MPH fastball, he might just have a chance.

Everything about this film is excellent, from the acting of every character in the film (Brian Cox as Quaid's distant military dad, Rachel Griffiths as his practical but devoted wife, and Angus T. Jones as his devoted young son), to the writing, to the set pieces, to the direction. Nothing in the film comes across as "Hollywood" or staged. The story is incredibly inspiring as Quaid works through the setbacks of his youth and the realities of providing for a family to follow his dream, getting support from his wife and the friendly folks of his hometown whenever he starts to give up. This movie will make you believe in your dreams and will leave you feeling like a million bucks. And it's rated G, a perfect (and totally un-smarmy) family film.

Highlight: When, on a whim, he fires a pitch past a roadside speed-sensor and it reads 76 MPH. In disappointment, he goes to get the ball, not noticing when the old device flickers to its actual reading of 96 MPH.